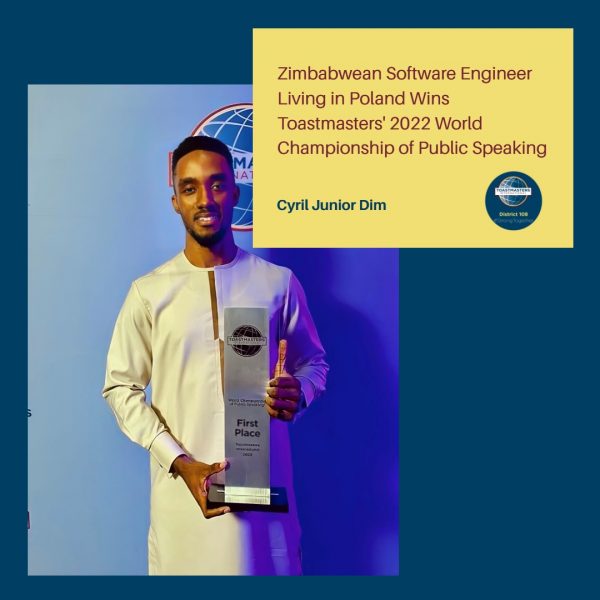 “This feels like one of those wild dreams,” said Dim. “I’m thankful that at every step of this journey people were able to see past my short-sighted vision. I especially thank Kamila, who’s been more than just a Coach across several championship attempts.” 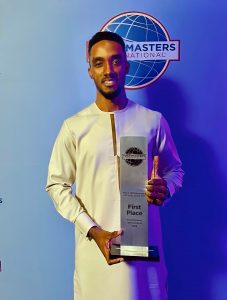 Dim’s winning speech was titled, “Ndini,” a word from the Shona language in Zimbabwe that translates to “this is me” in English. The speech centered on Dim’s journey of self-acceptance. “I addressed a time in my life when I wasn’t happy with who I was and the lengths to which I went to try and become somebody else,” he said. “Then I spoke about a friend of mine who made me realize that there is value in accepting who you are. From there came a new way of looking at the world where I viewed being different as an opportunity to be special if you accept yourself.”

In his acceptance speech, Dim said, “I want to thank the family that has believed in me. In a society where you can be a doctor, a lawyer, or a failure, to say you wanted to be a public speaker might have been met with some resistance, but my family prayed for me every step of the way.”

Dim claimed the title of Toastmasters’ 2022 World Champion of Public Speaking during the organization’s annual convention held as a hybrid event, Aug. 17-20.

Speakers delivered five-to seven-minute speeches on wide-ranging topics, and were judged on content, organization, and delivery.

This website uses cookies to improve your experience while you navigate through the website. Out of these, the cookies that are categorized as necessary are stored on your browser as they are essential for the working of basic functionalities of the website. We also use third-party cookies that help us analyze and understand how you use this website. These cookies will be stored in your browser only with your consent. You also have the option to opt-out of these cookies. But opting out of some of these cookies may affect your browsing experience.
Necessary Always Enabled
Necessary cookies are absolutely essential for the website to function properly. This category only includes cookies that ensures basic functionalities and security features of the website. These cookies do not store any personal information.
Non-necessary
Any cookies that may not be particularly necessary for the website to function and is used specifically to collect user personal data via analytics, ads, other embedded contents are termed as non-necessary cookies. It is mandatory to procure user consent prior to running these cookies on your website.
SAVE & ACCEPT